Fortnite Chapter 2 Season 4 is underway with a Marvel twist. Fortnite is no stranger to partnering with organizations to market materials. In fact, Fortnite has become one of the leading marketing techniques by many musicians (Check out Fortnite Effect), companies (Disney, Marvel, DC), and even films (Christopher Nolan). We have seen Fortnite and Marvel partner up several times in the past: Infinity War (May, 2018), Endgame (April, 2019), and Deadpool (February-April, 2020). This is the first time we have seen an entire themed season surrounding a company partnership. Thor is the

forefront character being the first skin you unlock this season. Each character has their own sets of challenges this season to unlock various items for each character. For example, Thor can unlock Mjölnir which will allow him to use it as a harvesting tool, glider, and anything else Mjölnir will allow. Having these set challenges for each character gives Fortnite that extra special edge to be able to evolve your characters as you play as them. Other battle pass based skins are She-Hulk, Groot, Storm, Dr. Doom, Mystique, Iron Man, and Wolverine. There are also several skins that will be in the store this season, including Venom and Silver Surfer. Never could I have imagined running around a map with Thor killing other people with a gold scar.

Something that has stuck with me for near ten seasons now is a comment that our fellow nerd Brandon had made back around Season 3/4… “I play and enjoy Fortnite because of the selection and diversity of gunplay.” In context he meant their is a huge variety of guns that can be used to eliminate enemies showing that one game you could have a very different load out then the next forcing a different play style but still be as successful. I have not felt that Fortnite has had the weapon variety they once had until this season. Ultimately I do not blame Brandon for losing interest as time has gone on from Fortnite. But this season I feel we have that sense of variety once again. There have been many weapon changes this season. 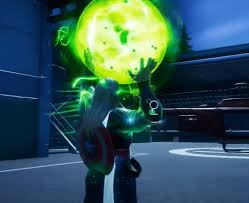 Many mythical items have been added including Dr. Doom’s Arcane Gauntlets, Dr. Doom’s Mystical Bomb, Groot’s Bramble Shield and Silver Surfer’s Board. There have also been trailer leaks of other mythical super hero abilities from Thor, She-Hulk, and Iron Man that have not been released yet. Another new weapon is the Stark Industries Energy Rifle for mid to long range.

These only drop at Quinjet Patrol landing sites.

Another new item added was fire traps. These traps are pretty much useless and do not put out as much damage as old traps but can still do the job if joined together in builds. Some other items they have brought back are the jump pads, impulse grenade, combat shotgun, pump shotgun, scoped AR, silenced sniper, silenced smg, tac smg, and even the port-a-fort. The only thing it looks like they have taken out is the tac shotgun, launch pads, and standard/combat smg. The weapon variety is wide range this season leaving it open for individuals to run full mythical weapons, standard, or a mix of both to achieve the victory royale. Many have expressed being upset about launch pads being removed, but there is so much mobility now in the game. Between boats, cars, and helicopters we still see people using jump pads, Silver Surfer’s Board and impulses to move around the map.

Initially I was disappointed in the map seeing the only main location place that had changed was Pleasant Park had now become Doom’s Domain.

Dr. Doom is the NPC Boss in which you can take out to get his mythical weapons. I further realized that there are several other landmarks to be visited such as Sentinel Graveyard and Quinjets that fly in next to the bus at the opening sequence. At each Quinjet you can find Stark Robots defending, if defeated you will be able to use the Stark Industry Energy Rifle and usually a supply drone will drop a different mythical weapon.

Also throughout week one we have already seen 3 new locations added to the game. These locations include Ant Manor, Trask Transport Truck, and a Black Panther Memorial. Along side these locations Fortnite has also brought along rifts. Another poi on the map is solar panels placed along the map

that have already started shooting red rays into the sky (Who knows what this could be leading to but one could presume it is a future in-game event). Overall, the map still does not have all the updates one would wish for on a new season release leading to disappointment but showing a promise for the future of the season. Since it is only one week in and we have already seen three map updates, things are looking bright for the future of Fortnite’s map.

Finally one of the last big pieces Fortnite has changed is the fishing technique. For the first three seasons of chapter two we have been catching and collecting only 4 fish: Small Fry, Flopper, Slurp Fish, and the very rare Mythical Gold Fish. But this season we have been given a full fishing log of near 40 fish. Within the log individuals can see their friends and who has caught the best of each fish. These additional fish include different types of jelly fish, spicy blow fish, chum hop fish, shield fish, and much more. It is a fun little addition to be able to compare sizes with others.

In conclusion, for the first time in since chapter one, I feel Fortnite is actually caring about their game, updating it, and listening to what the fan base is looking for. Ironically, they started caring about their game once a lawsuit started with Apple. With the decreased price of V-Bucks, I say this season’s battle pass is a cop. Even I had entirely stopped playing Fortnite during chapter two but now they are reeling me back in. So far I have really enjoyed this season and felt the game has a updated, refreshing feel to it.